I was asked where is the best part of Berlin to visit on a three hour bike ride. I came up with this short tour around the historic central part of Berlin. The route starts at the Brandenburg Gate and follows a ‘crooked rectangle’ along Federal routes 2 and 1 marked in yellow on the Google map below.

We start at the Brandenburg Gate, once inaccessible behind the Wall, now the top tourist attraction in Berlin. 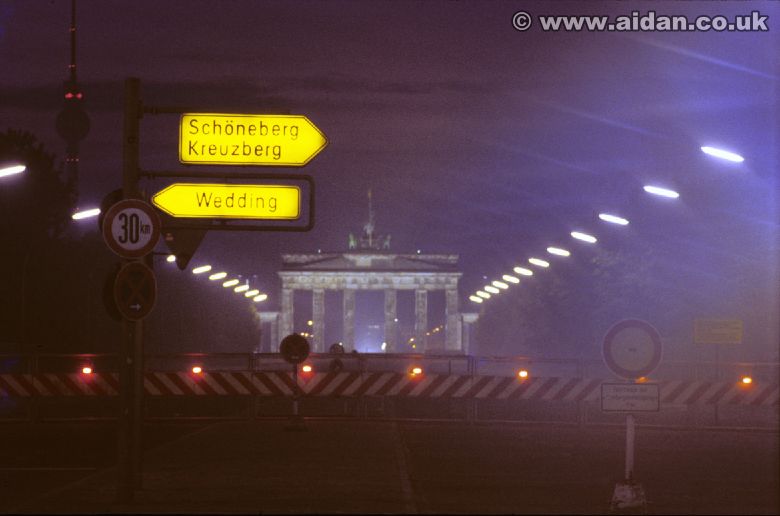 Nearby is the Reichstag, home of the German parliament, the Bundestag.

We continue through the Brandenburg Gate onto Unter den Linden with its magnificent buildings on both sides.

Soon we cross onto the island formed by two arms of the River Spree. This is the historic heart of Berlin.

To the left is the Museumsinsel – the ‘museum island’ with several major museums.

The Cathedral with its large dome stands nearby, and just across the wide avenue is the site of the GDR’s demolished 1970s style ‘Palace of the Republic’. Now, the Kaiser’s Palace is being rebuilt. 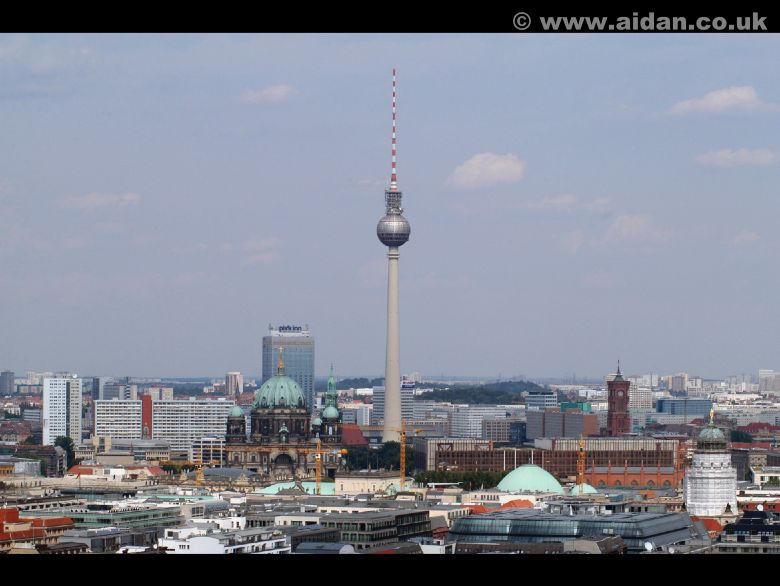 We continue further and we see the Television Tower built in 1973 and nearly 1200 feet high.

Alexanderplatz station is up ahead. Here you can take your bike on suburban train to all corners of Berlin, but there’s no time for that today! 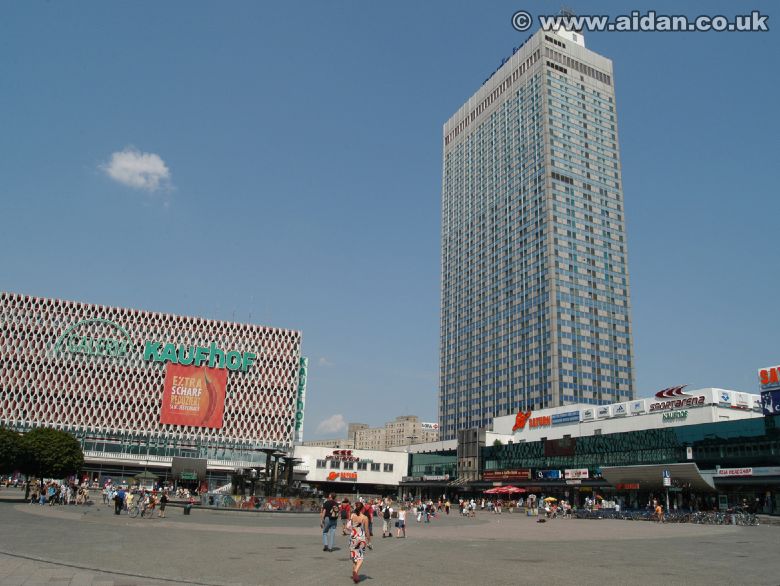 The Alexanderplatz is a wide square that retains the architectural style and atmosphere of the GDR. In the corner is the World Time Clock, built during the GDR period.

We continue round onto the wide Grunerstraße. Now we are on Federal route number 1 and heading through the Fischerinsel district and onto Leipziger Straße. Soon we are at the intersection with Friedrichstraße, and turning left here, we come to the site of Checkpoint Charlie, the famous pedestrian crossing point between West and East Berlin. The Haus am Checkpoint Charlie museum is a must-see. 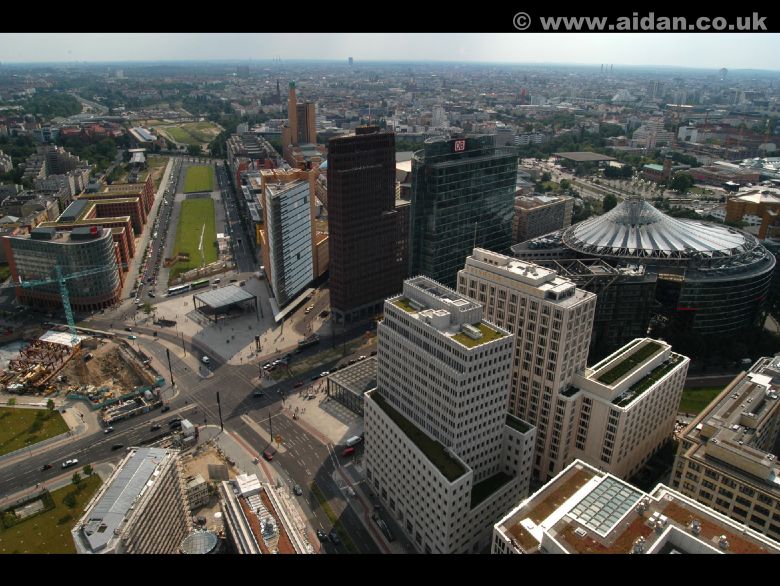 From here we can follow the line of the Berlin Wall. There are metal strips in the ground marking its path. We pass Martin-Gropius-Bau – venue for the 2014 David Bowie exhibition and onto Potsdamer Platz (Square), once a wasteland caught between East and West, now a busy traffic intersection again, overlooked by office towers and a shopping centre.

A short distance from here is the Memorial to the Murdered Jews. It’s a rectangular plot of land with large stone squares. 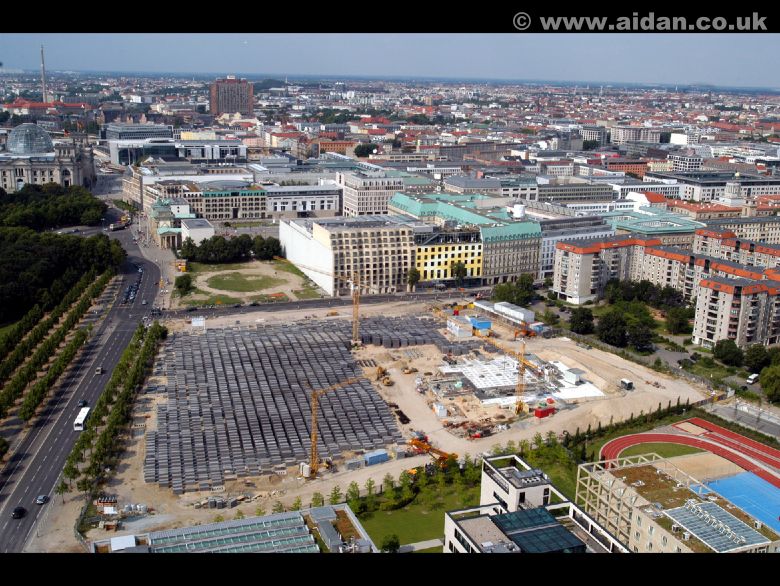 We can see the Brandenburg Gate from here and in just a couple of minutes we are back there again after a very quick tour on two wheels.

To see all the sights of Berlin you’d need more like three days or maybe three weeks – or years but these three hours will have to suffice for now!

I went to Liverpool Anglican Cathedral and inside, I saw the moon – not the one in the sky but a scaled down moon 1/500,000th the size of the real one.

It was on display at the north end of the cathedral. The effect as you enter is breathtaking. There, in front of you, is a faithful representation of the moon, with all its grandeur and hypnotic power.

I coudn’t take my eyes off it. The scores of visitors couldn’t either. They photographed it, had selfies taken with it, put their hands out and pretended to hold it while they had their photo taken. They sat on the steps either side gazing at it, walked around it, lay on the floor staring up at it.

It’s an artwork created by the artist Luke Jerram, but for me, the fascinating thing about this representaton of the moon is that it is a composite photograph, a three dimensional print. It’s basically a sphere with a large composite image of the moon’s surface printed on it.

You can find lots of information about Luke Jerram and his incredible moon on the Museum of the Moon website. I particularly recommend the Radio 4 documentary on the ‘Press’ page. It is presented as a video with still images of the artwork in the various locations it’s been on display. These include Tintern Abbey in Wales, a swimming pool in Rennes, France, the Commonwealth Games in Australia and many more.

Actually there are multiple moons on tour all over the world.

It has a magical presence but basically it is a balloon, a similar one to a weather balloon, with artwork printed on it. Luke Jerram has used the technology that’s readily available to create and print this masterpiece and it makes me think: “Why didn’t I think of that?”

The moon is made out of curved sections which are each printed with photographic images taken by NASA’s Lunar Reconnaissance Orbiter. They are then assembled into a sphere which is inflated and hung from above. The sphere is lit up from inside.

For me, the moon looked best later on in the evening as the sunlight fades. Then you can imagine you are in lunar orbit, observing it from hundreds of miles up.

It’s a remarkable experience to see the moon – or a copy of it – so close. It’s not possible to touch it as it’s suspended not far above arm length above the ground.

It’s even more remarkable to see the hidden ‘dark side’ of the moon, the side we never see as the moon is constantly facing us. This strange half of the moon is covered mostly with craters, while the familiar side has its distinctive darker ‘seas’ surrounded by countless craters and even craters within craters.

One of the ministers at the Cathedral provided information to visitors and he pointed out the exact location of the Apollo 11 landing site in the Sea of Tranquility. I looked hard but didn’t see the spacecraft!

By the way each centimetre represents five kilometres of the moon’s surface so if I could touch my thumb on the surface, it would cover an area as big as a medium-sized airport.

I had intended to spend maybe half an hour there, but I ended up staying around three hours. I felt reassured, inspired, comforted by the proximity of the moon.

Exhibiting it within a place of worship adds an extra level of meaning. The prayers offered in the cathedral seemed fitting.

Some observations: This moon is lit up from within with no dark areas, but at any one time, only about half of the real moon is in sunlight, the rest is in shadow.

The Lunar Reconnaissance Orbiter surveyed the moon’s surface from orbit and recorded the images at different times. For this reason some of the craters have the shadow on the left and others nearby have the shadows on the right. This makes your eyes see them with the curious ‘bulging crater’ effect, where you see the crater in reverse because you think the shadows are from the left when they’re from the right, and vice versa. That’s not a criticism and probably not many people will have noticed it.

What would really improve the experience is if the sphere were continous all round, as well as top and bottom, with no joins and no circle at the top and at the bottom.

It would also be great if the sphere floated – I believe Luke Jerram is working on this and I can’t wait to see the floating, helium-filled moon when it is ready.

All in all it’s one of the best things I’ve seen in a long time and it has presented many opportunities for photographic experiment. I’ll present those in another article.

For now, let me just say that I found this artwork stunning. I grew up with the moon landings and have taken countless photos of the moon myself. Whenever I look at it rising in the sky, it still has a powerful visual effect on me, probably dating back to those ‘moonshot’ times of my childhood.

I went back for another visit on Thursday night, the last night. I managed to get there for 9.45 – there was a long queue. Soon we were inside and I savoured those final moments with the moon. At 10:30 the minister read a special prayer and we recited the Our Father, it was time to leave and the Cathedral security employees herded us towards the door. One of them gave me a stern talking to as I took my final shots. Not suprising as they had had a very long day!

At the front door I gazed back at the moon one last time and then walked out under the dusk sky. I couldn’t see the real moon, too much cloud.

I’ll write more about techniques to photograph the moon in another post.

If you have a chance to see and photograph this incredible, astonishing and mesmerising artwork, then go and see it. It is, in the truest sense of the word, awesome.