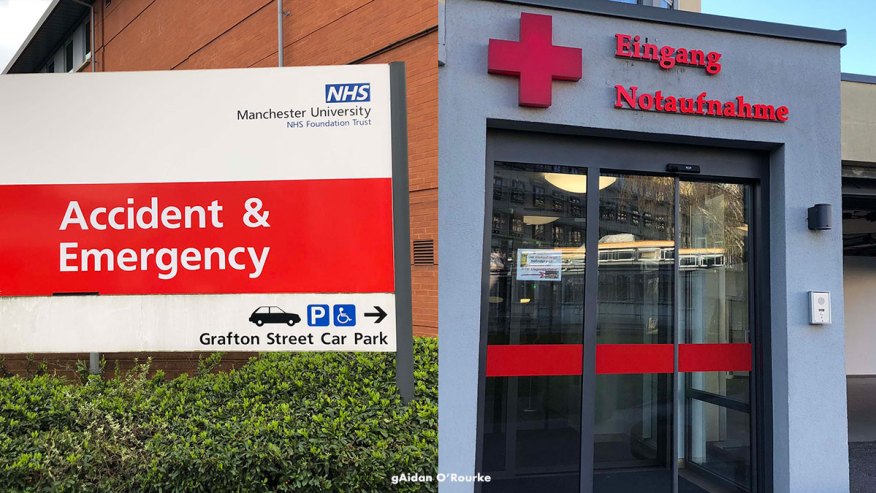 In the past few years I’ve moved from photographer-writer towards maker of educational videos. I’m a coach in languages and so I am keen to explore languages – especially German – but at the same time provide content for a wide audience.

I’ve always been interested in a wide range of themes. I use my photography to illustrate my work. Previously I produced only articles in writing. Today I produce video essays that consist of photographs and videoclips as well as charts and tables. Nowadays I use library images and videoclips, but I still like to use as much of my own material as possible.

Following a suggestion from a colleague, I decided to make a video that looks at the question of the UK’s health service, the NHS and how it compares to the German health system.

I’m currently planning the video essay, and in this blog post is developed from my draft script. I intend to share it with people and gain some feedback before going on to make the final version of the video

Which health system is better? The British NHS or the German healthcare system?

Well, it’s complicated! So put I together some key facts and I am also going present some medical-related words and phrases in German that will be useful for everyone.

OK, so what is the fundamental difference between the UK system and the German system?

The UK NHS is owned and run by the state and it’s free at the point of use.

The German system is mostly free at the point of use but it’s paid for through contributions to a state-run health insurance scheme.

In Germany people pay for the health system by paying social insurance contributions into a health fund – Gesundheitsfonds – which then goes into a Krankenkasse or health insurance ‘pot’. The money is taken out of their salary and the employer also contributes 50%.

In the UK, the money to support the health system is paid by the government, mostly through general taxation.

The NHS was launched in 1948 at what was then Park Hospital in Urmston near Manchester. Today it’s Trafford General Hospital. A blue plaque commemorates the launch. British people are proud of their NHS and often compare it unfavourably to the US system. They like the fact that it’s free, unlike the American system which relies mostly on private health insurance.

Aneurin Bevan was Labour health minister and he is credited as the father of the NHS. A statue of him is in Cardiff.

The UK system is more like the old East German system, and that’s not a criticism. The East German health system provided a good, basic service, though without the expensive equipment found in the West.

After the end of Communism – nach der Wende – the West German system was introduced into the East.

The German system goes back to the late 19th century, when under Otto von Bismarck, Germany pioneered the welfare state.

This system is still in use today. Krankenkassen are non-profit making organisations, that are governed by strict regulations.

You are required by law to pay into a Krankenkasse. You can see it on your pay slip. If you earn above a certain amount, you can insure yourself with a private Krankenkasse. Many cater for specific professions.

In the UK, the National Health Service is paid for by the Government. The amount paid by the government varies depending on which political party is in power, whether Labour or Conservatives.

So in theory, if you have a higher income and/or a better job, you can get better healthcare. To what extent that is true lies outside the scope of this video essay!

The NHS has been had a funding crisis for many years – German system is not perfect but it’s well-funded.

Due to Brexit, the NHS has a serious staffing crisis and it’s getting worse. Many staff are leaving and new people are not being recruited. A no deal Brexit would be very bad for the NHS for many reasons. Staying in the EU is better for the NHS, though it still needs to be improved.

So which system is better? Well, before we answer that question, let’s ask a few more…

Which are the best hospitals in the UK and in Germany? Here are some famous ones: famous UK hospitals include Guys Hospital in London, Queen Elizabeth Hospital Birmingham, The Christie in Manchester and more

in Germany Universitätsklinikum Heidelberg, the Charité in Berlin, Asklepios Klinik Barmbek – Hamburg and the Uniklinikum in Köln.

What are the practical differences between UK and German hospitals? For this video I went for a walk around a few hospitals in the UK and in Germany.

In German hospitals, each department or  unit functions as an independent practice – Praxis – like this Children’s emergency Praxis in Cologne.

In the UK most departments and units mostly display the NHS logo. Services have been organised into NHS trusts to provide more autonomous control. Some services are provided by outside companies.

In Germany you won’t see this, everything is funded.

This is especially true of hospices. St Ann’s Hospice near Manchester receiveS just over a third of its funding from the NHS. That means it needs to raise around £20,000 every day just to keep the hospice running.

They organise glamorous celebrity dinners, midnight runs and many other great events. They run charity shops as well, but is it right that a facility providing a basic healthcare service needs to do this?

In Germany hospices are fully funded.

Here are some more differences I found.

The emergency ambulances in Germany sound like this but in the UK, they sound like this. The German siren is called the Martinshorn, named after the company that makes it.

In Germany they’re red and in the UK they’re yellow and in both countries often see the same basic vehicle, the Mercedes Sprinter.

In recent years, smaller hospitals have been closed and their services, including A&E transferred to larger single-site hospitals.

This means ambulances have a longer distance to go than before. I hear many ambulances passing every day but in Germany, I seem to hear fewer? Is this really the case?

Parking at hospitals is an important issue. At German hospitals, it’s generally free for a period, then there’s a charge.

This is also the case in Britain, though some have very expensive charges, as here at Stepping Hill hospital in Stockport.

If you are citizen of another EU state,  you can receive healthcare on the same basis as German nationals

Similarly citizens from other EU nations are treated for free by the NHS – or more exactly, the NHS charges the cost of the treatment to the home country.

I once had a bike accident in Germany, and I was given first rate treatment at the local hospital. The bill of 233,50 Deutsche Mark was charged to the UK and I didn’t have to pay anything.

If you do suffer illness or an accident in Germany you’ll be able to gain first hand experience of healthcare in Germany and you’ll be better able to answer the question of which has the better healthcare system, the UK or Germany.

But before I answer that question, let’s take a little language lesson and I’ll ask another question: What do doctors say when you go and see them?

Doctors in the English speaking world say ‘What seems to be the problem? What can I do for you? or maybe ‘How can I help you?’

German speaking doctors might ask you ‘Was fehlt Ihnen?’ – what’s wrong with you, literally what’s missing from you? Also ‘Was kann ich für Sie tun?’ or maybe ‘Wie kann ich Ihnen helfen?’ – How can I help you?

If the pain is coming from your hand, foot or leg you can say ‘ tut mir weh’ – it hurts

For other parts of the body, consult a good dictionary!

If there’s been an accident and you need to phone 911 ou can say:

Okay, so let’s get back to the important question: Which system is better, the UK healthcare system or the German health system?

In doing my research I found an interesting video on the BBC website (link below) with some interesting informatin:

Most people I’ve spoken to think that the German healthcare system offers a higher level of service. But people in Germany have to pay for their system directly out of their salary. Some  pay many hundreds of euro each month.

The British healthcare system provides a good system too, and though people don’t pay contributions directly towards the health system, the NHS is paid for through taxation and a share of National Insurance contributions.

So that’s it, a quick and hopefully entertaining overview of a very complex subject. I hope it will arouse people’s curiosity and encourage them to look for more detailed information online.

If you’re interested in learning German, go to aidan.co.uk/german to see my coaching and one to one services.

If you’re visiting Germany, I wish you gute Reise! and if you’ve visiting the UK, enjoy your trip and if you’re coming from an EU country, don’t forget your EHIC card!

Here’s the link to the BBC video I found.

As I said at the top, this is just an outline for the video I am planning. Eventually it will appear on this page and on my AidanExplorer YouTube channel.

Many thanks for reading and please contact me directly if you have any suggestions!