In this post I present my portfolio of illustrations, done in various locations and at various times.

I was good at drawing as a child and enjoyed art at primary school. In fact I won an art competition two years running.

The first was a poster for an anti-crime campaign by the police. I designed a poster with a sports car and the slogan ‘Flashy or not, lock it!’.

I won a Kodak Brownie camera, which I remember picking up as a very excited 8 year old from the police station in Stockport.

The second year I did a drawing of Tom Thumb standing on a giant hand. For that I won a Kodak Instamatic camera, which I also collected from the duty desk at the police station.

Both works were exhibited at Stockport Art Gallery.

Unfortunately, I don’t have these pictures today.

At grammar school I wasn’t able to study Art due to a timetable clash with Music. I drew from time to time and finally started to experiment with photography more seriously at university in Dublin. I turned to photography as I had grown impatient when doing drawings and found it difficult to draw faces.

For me, photography and art are complimentary. I’ve done mostly photography but occasionally, when I’m in the mood, I’ve done drawings.

I attend life drawing classes, but drawing the human figure is difficult. The face is even more difficult. But with sketches of buildings, it doesn’t seem to matter if the proportions are not quite accurate. My style is sketchy and scribbly but it seems to work.

I prefer drawing to painting and I especially like to do line drawings.

I’m inspired by art and often go to art galleries such as the Walker in Liverpool, Manchester Art Gallery and the Tate Britain in London.

I’m very interested in fashion illustration from around 1900s to the 1920s, which was actually quite Japanese-influenced.

David Hockney’s (b. 1937) line drawings are fantastic and some are quite risqué!

I really appreciate the illustrations of Patrick Nagel (1945-1984) who designed that famous album cover for Duran Duran.

I have lots of ideas, which I intend to explore and I’ll share my work my on Facebook and social media.

Many thanks to my friends on Facebook for their positive feedback and encouragement. 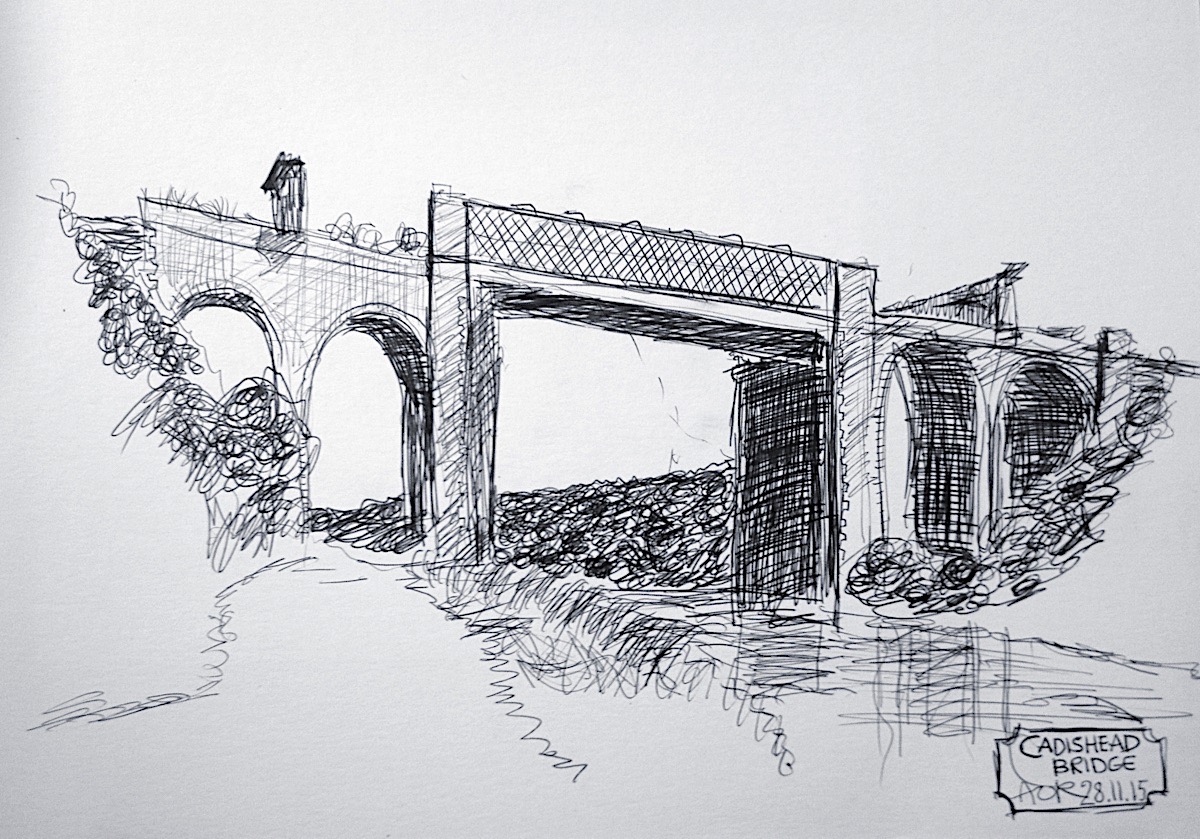 Cadishead Bridge on the Manchester Ship Canal. Copied from a photograph. 28 Nov 2015 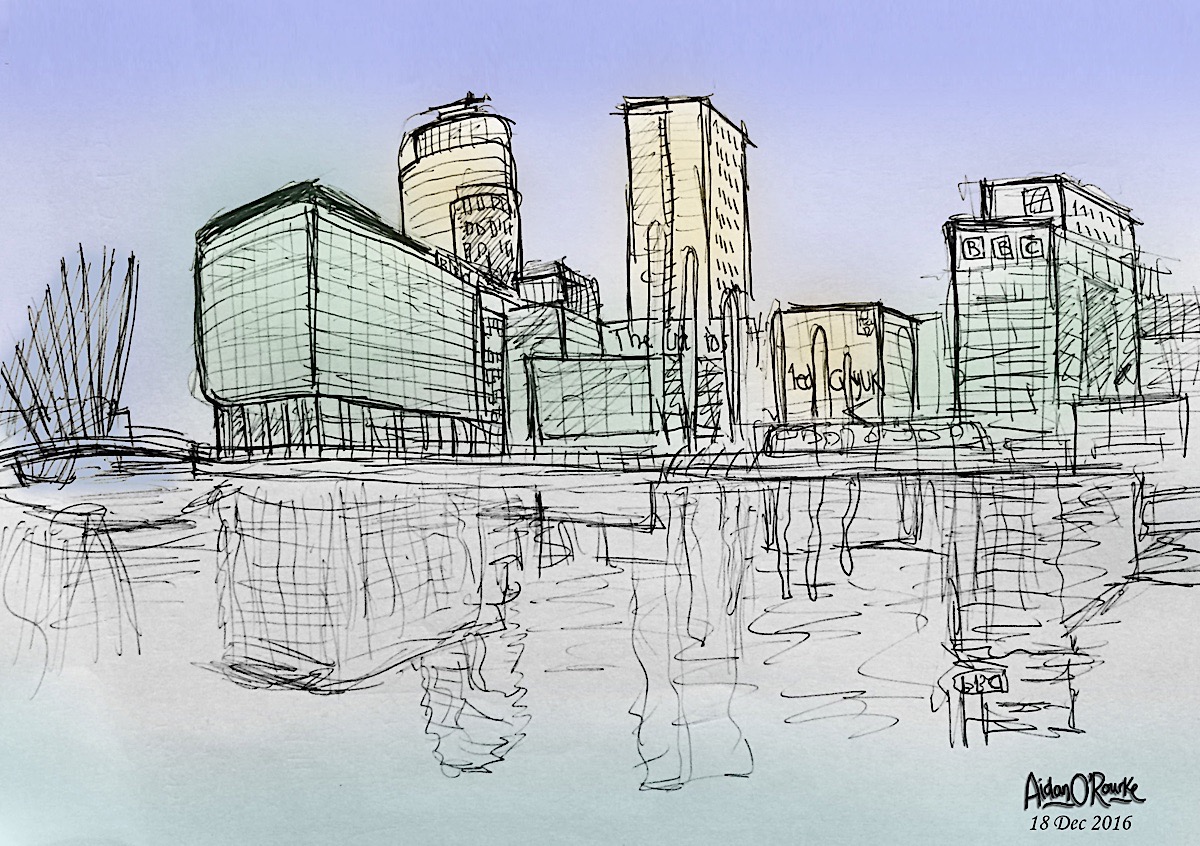 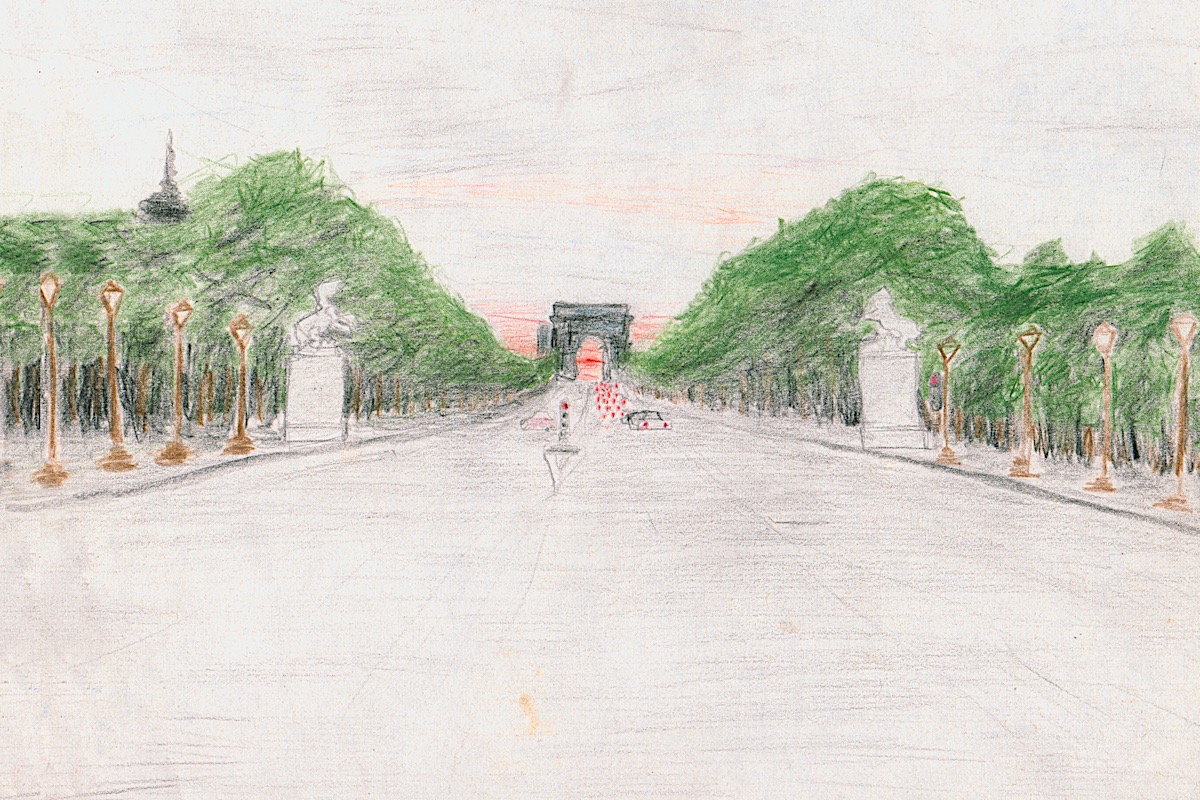 The Champs Elysées, Paris, drawn at the location, July 1977 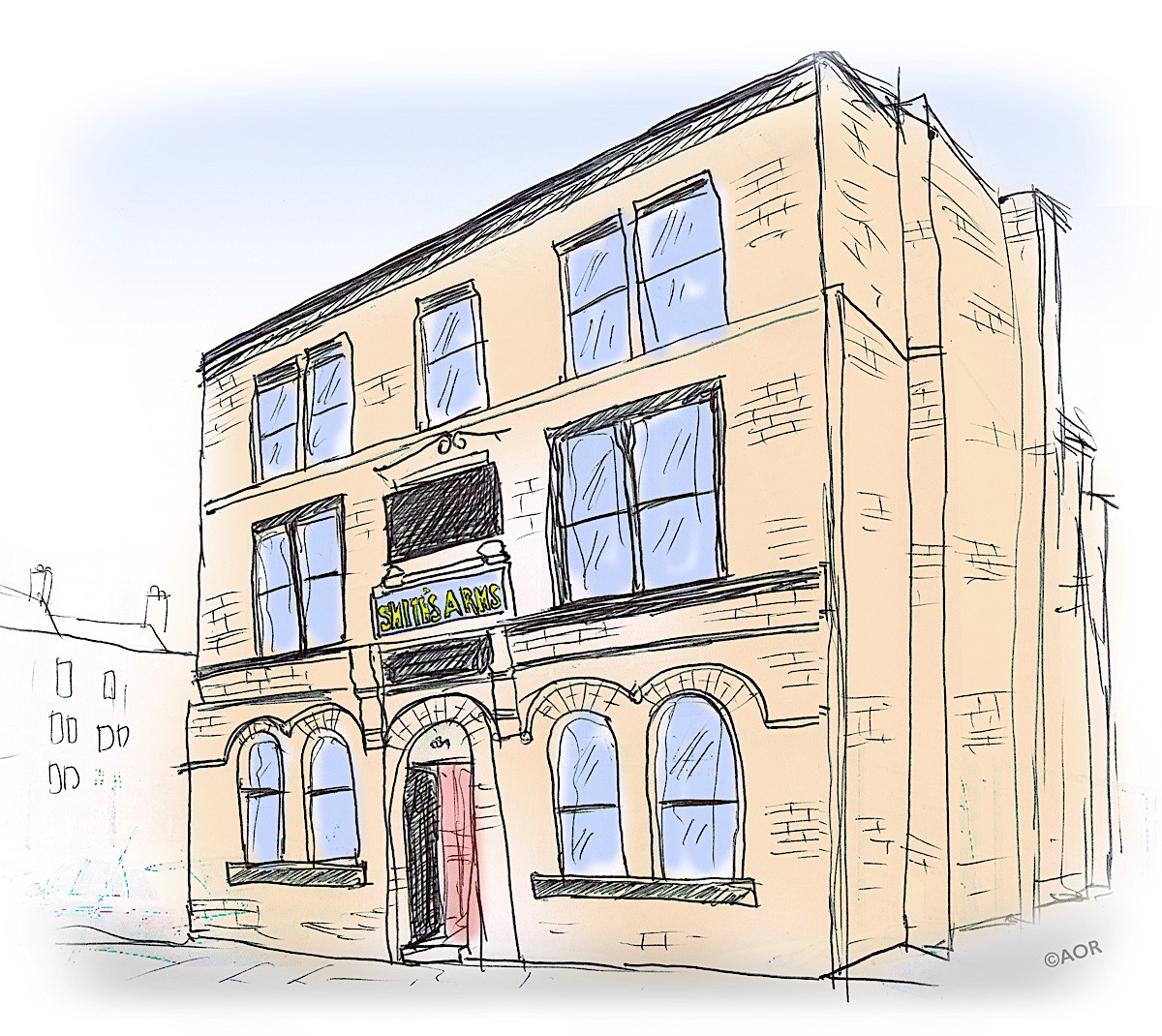 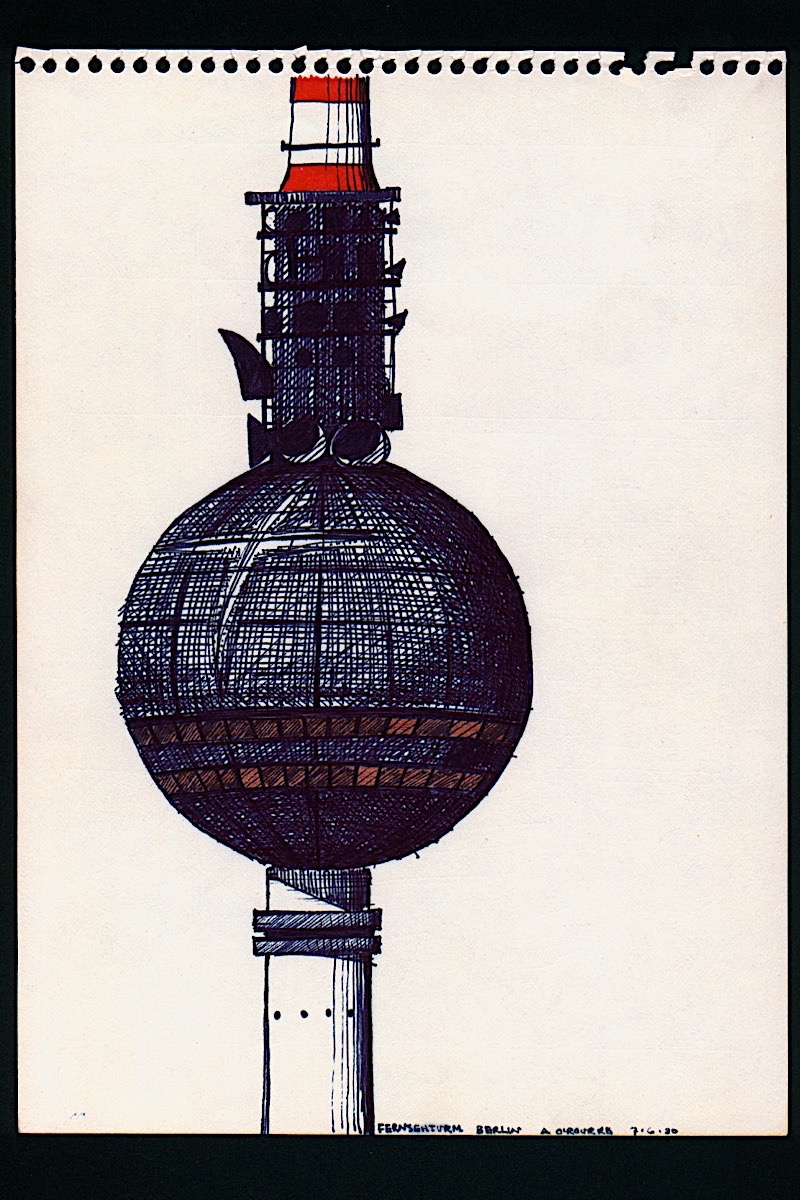 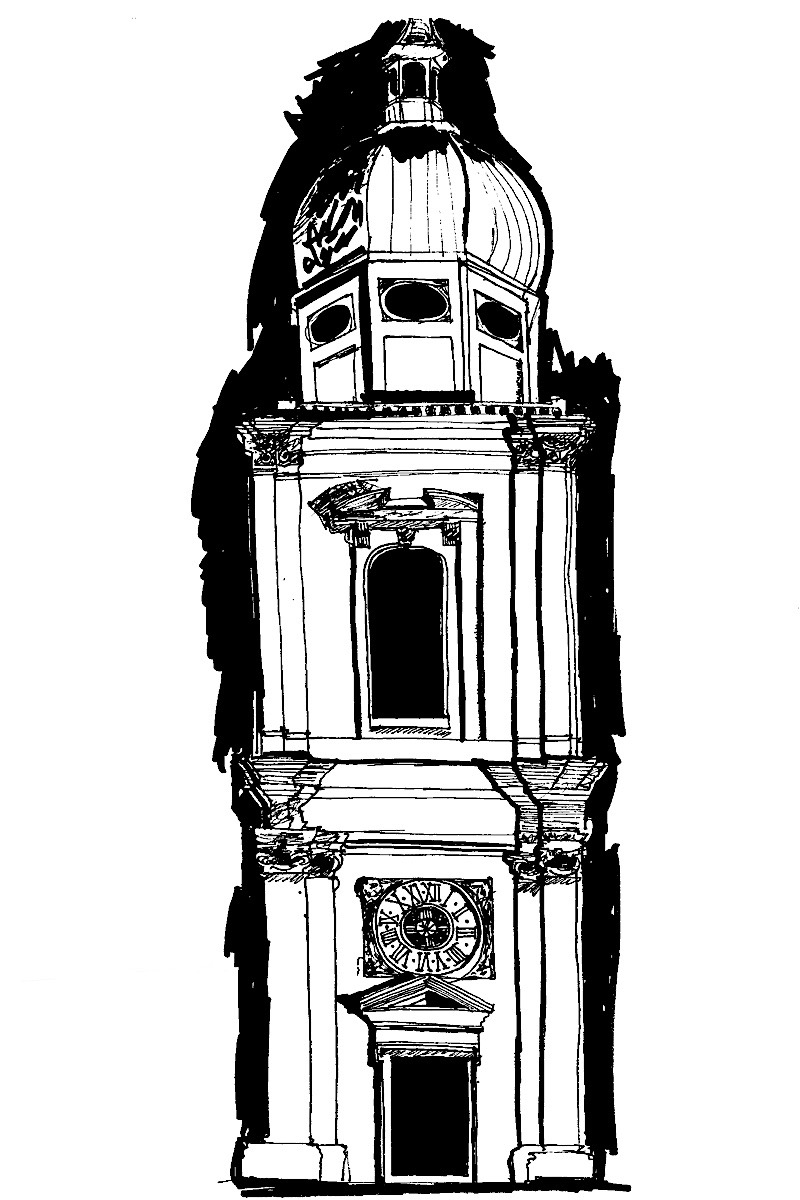 Drawn at the location on a visit to Salzburg Austria, 1980 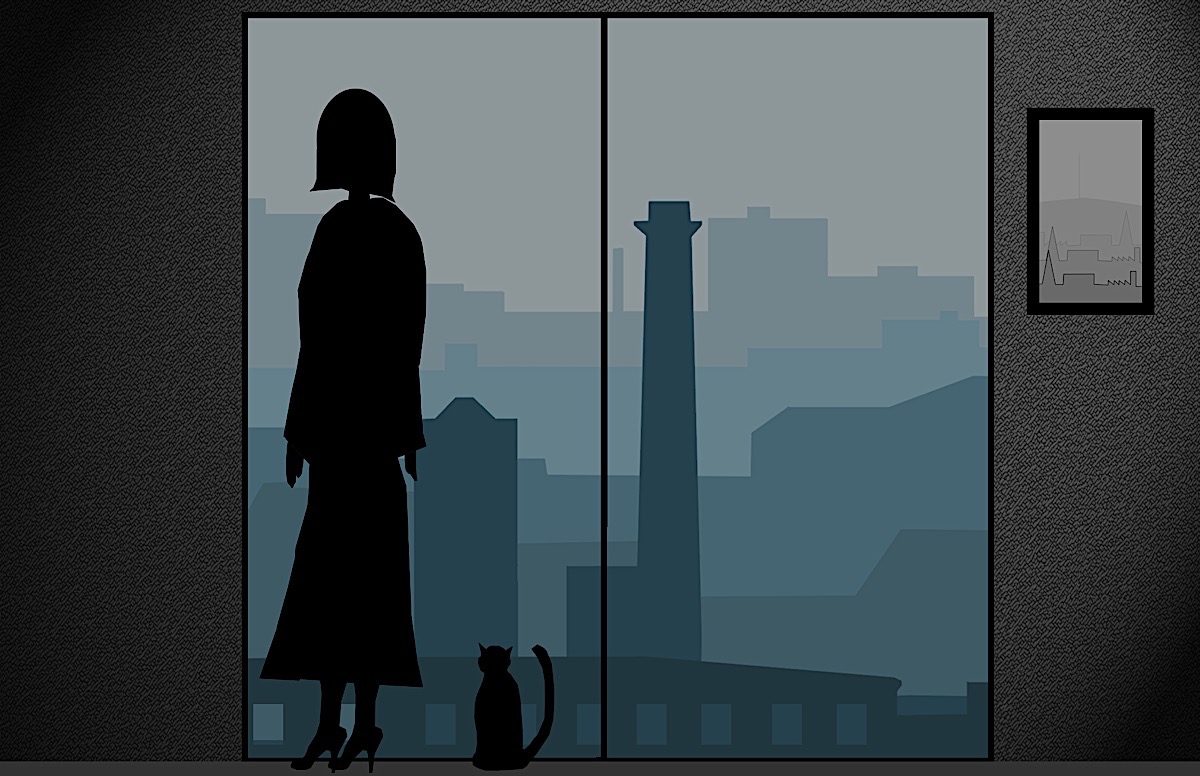 Test image made in Photoshop copied from photos. 1 Jan 2010 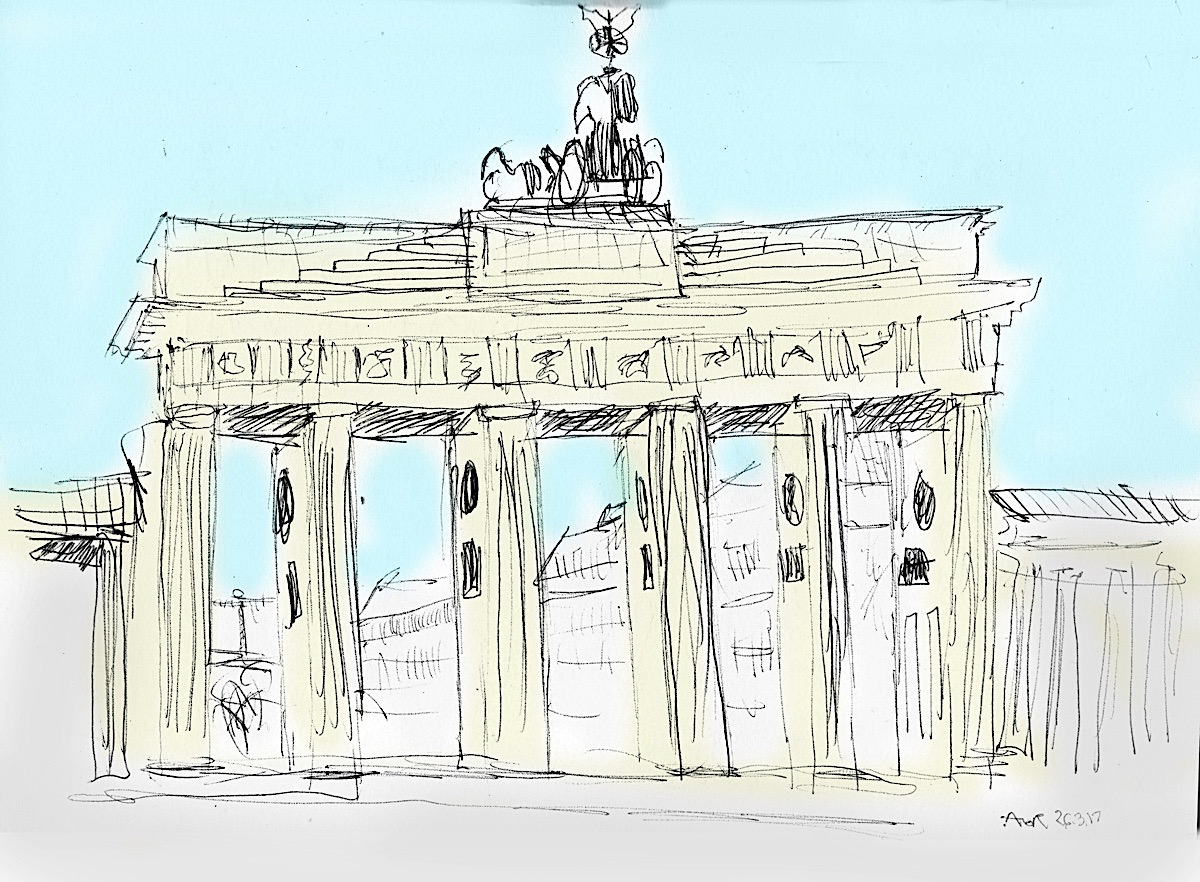 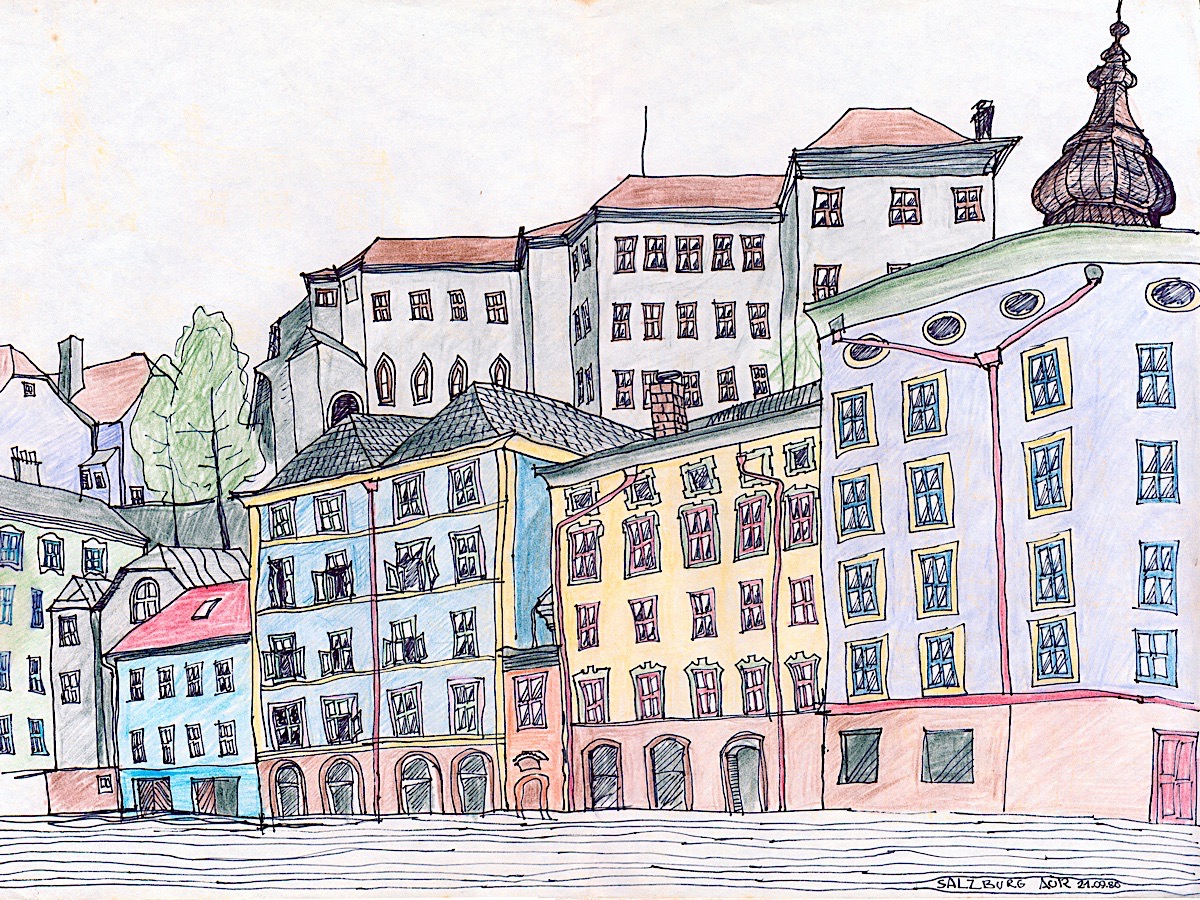 Salzburg, drawn at the location on a visit to Salzburg, Austria / Österreich 21.09.2019 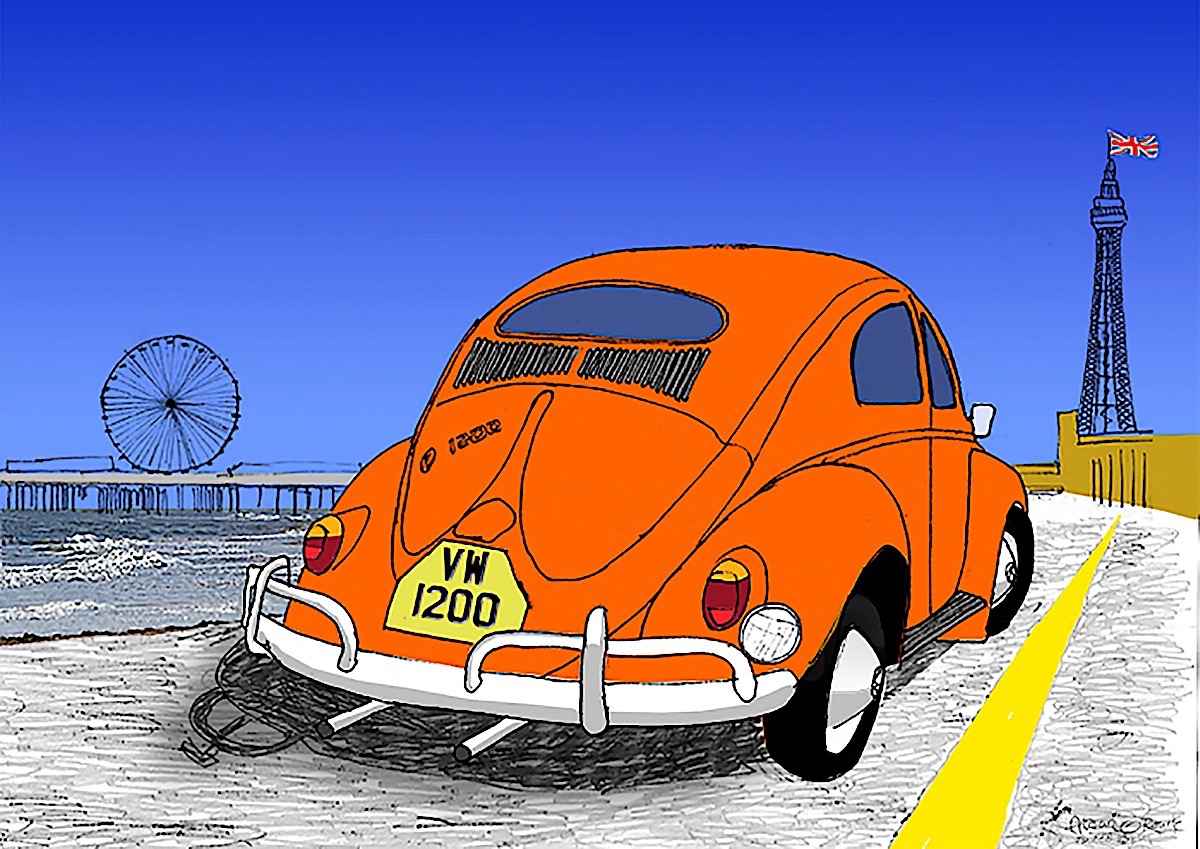 Illustration of an orange VW Beetle on Blackpool Promenade

Test cityscape illustration made in Photoshop. With the towers of Manchester town hall and Royal Exchange, looking towards Winter Hill. 31 Dec 2009 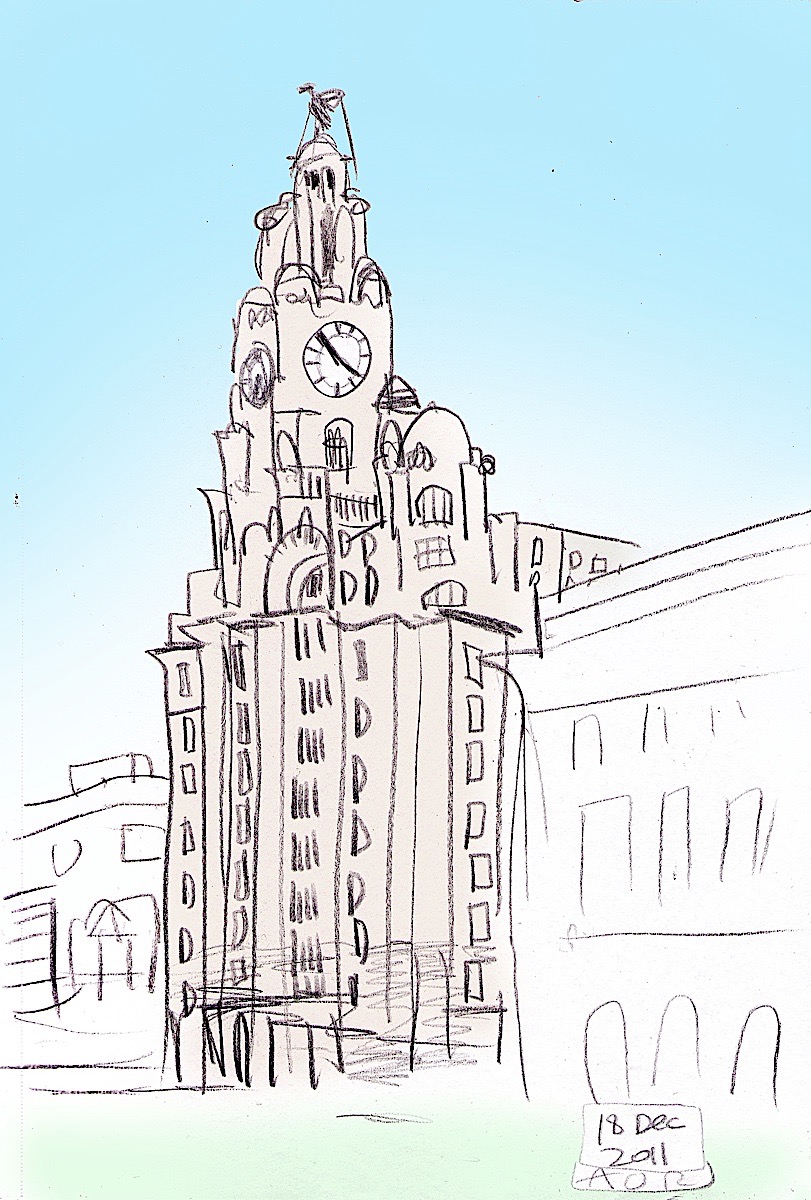 Rapid sketch of the LIver Building drawn at the location. It had to be rapid as the temperature was freezing! 18.12.2011 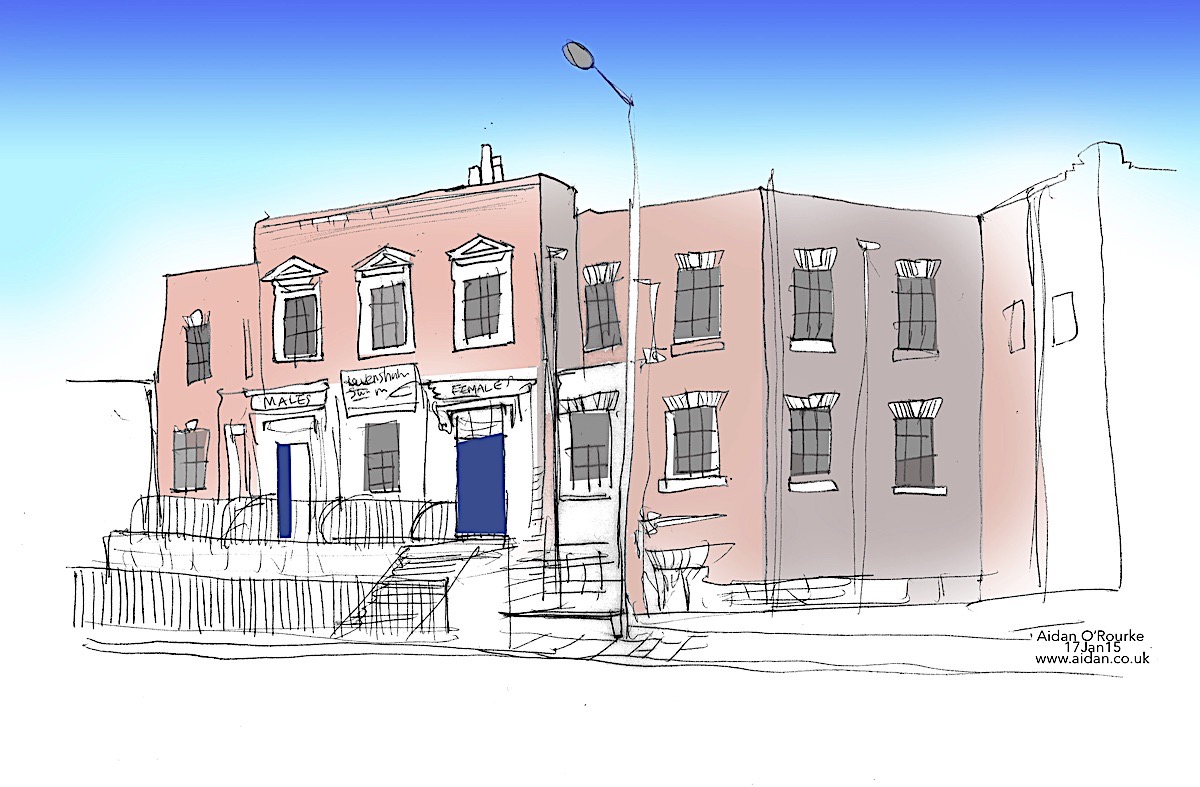 Copy of artwork from the opening credits of The Untouchables tv series, made in the 1950s. The buildings are in downtown Chicago. When I visited Chicago, I saw this location. The viewpoint is at the southern end of North Michigan Avenue. Drawn around 1988 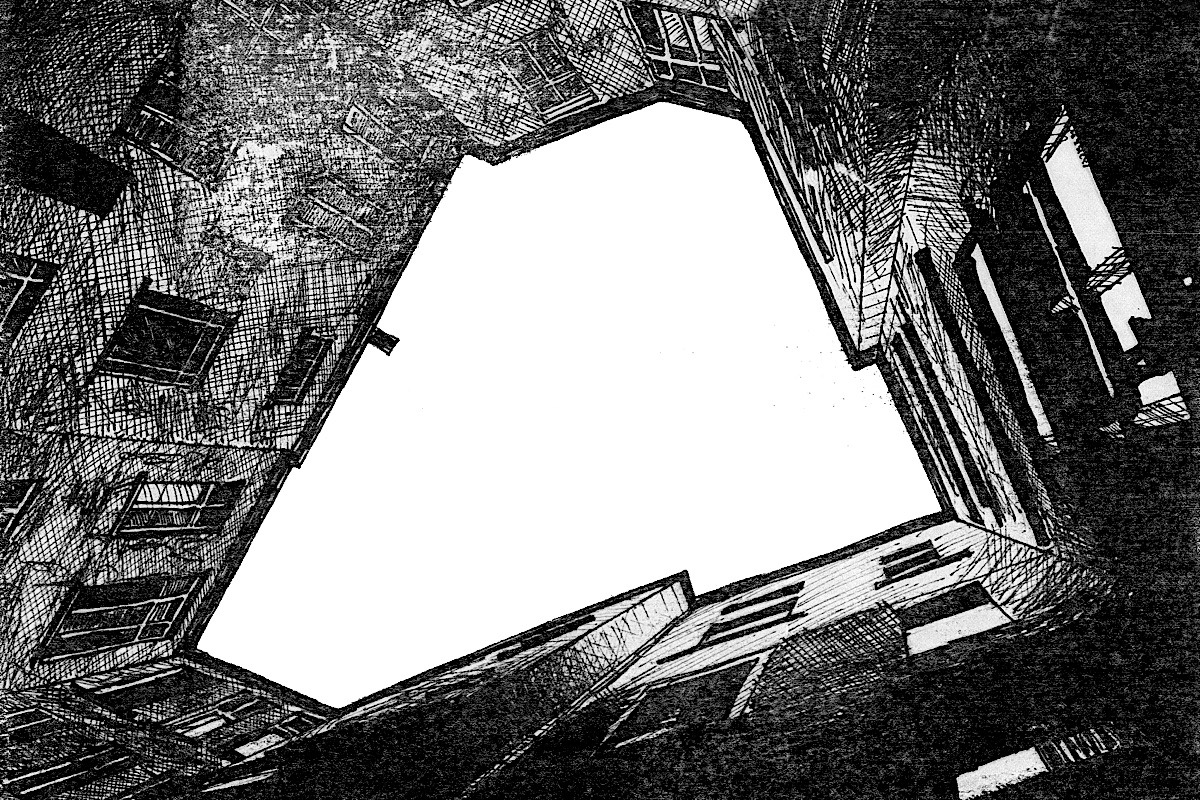 Copy of a postcard. I lived in a flat which overlooked a courtyard – Hinterhof – like this one. Drawn 1980. 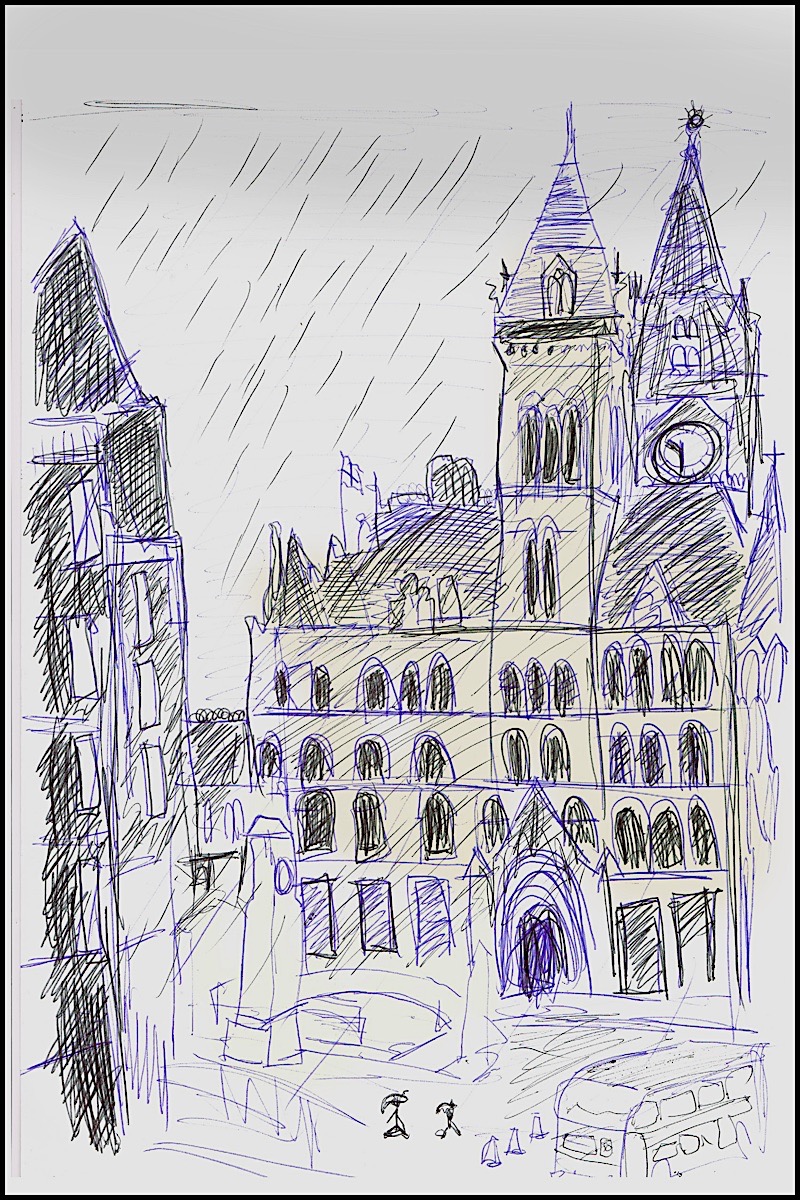 A very rough sketch of the east facade of Manchester town hall in rain. The viewpoint is the window on the first floor of Manchester Art Gallery. 09.11.2016 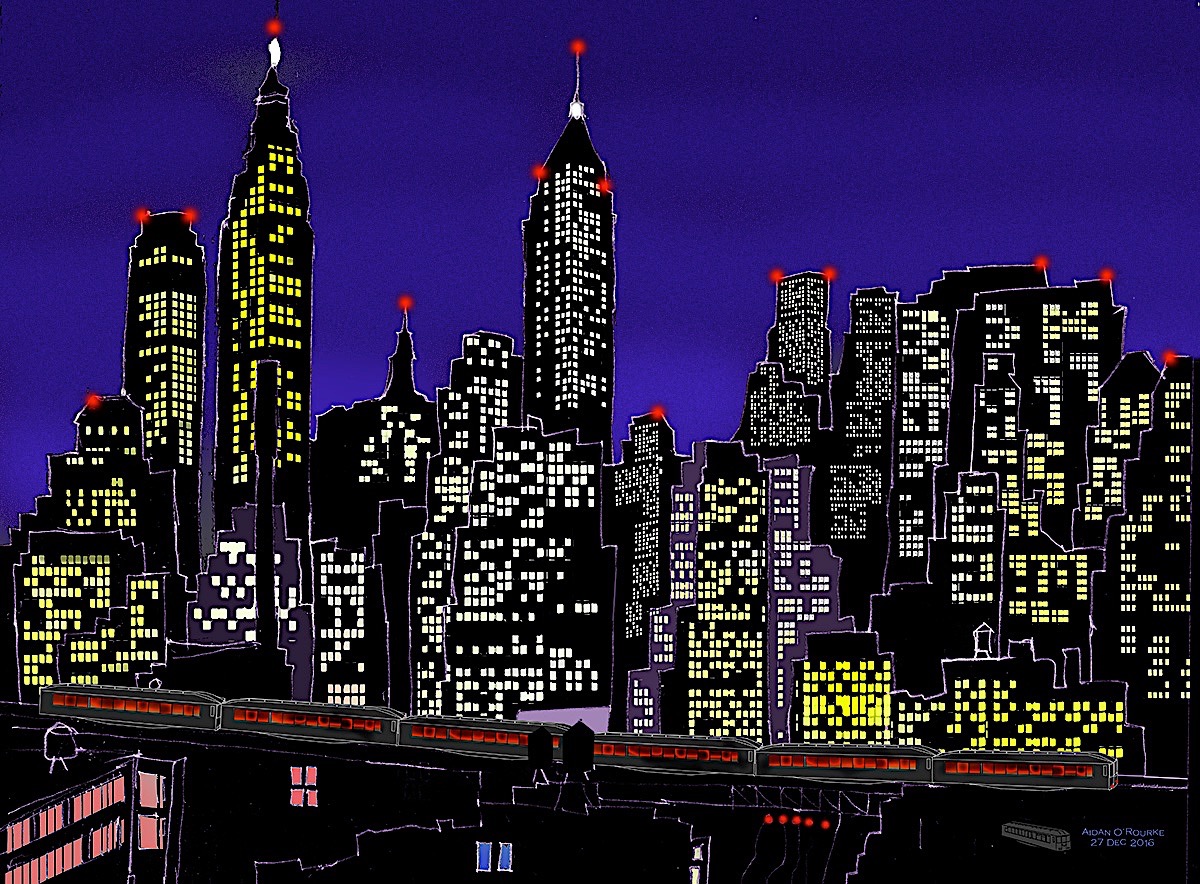 Fantasy cityscape image of New York, drawn first on paper from a 1930s photograph, then scanned and built up using Photoshop layers. 27.12.2017 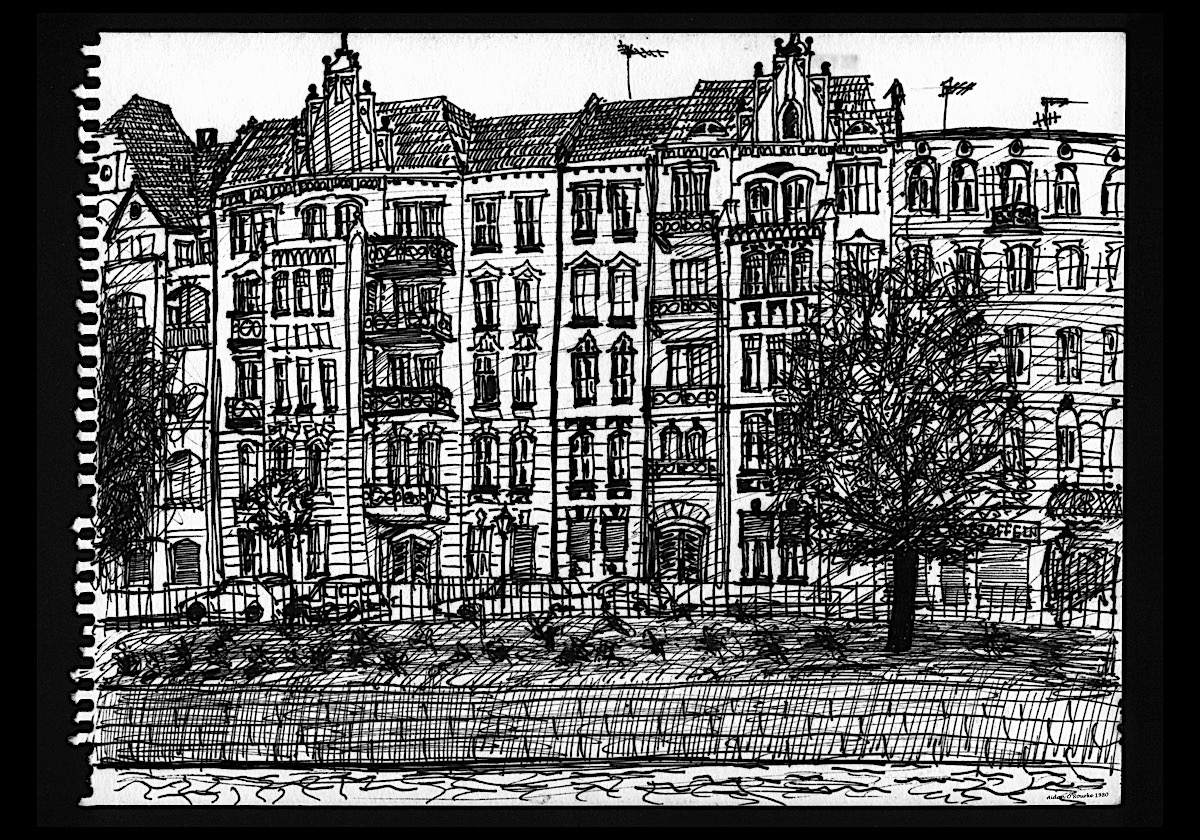 Facades on the Landwehrkanal, Kreuzberg, Berlin. drawn around 15.05.1980 during my year spent in West Berlin 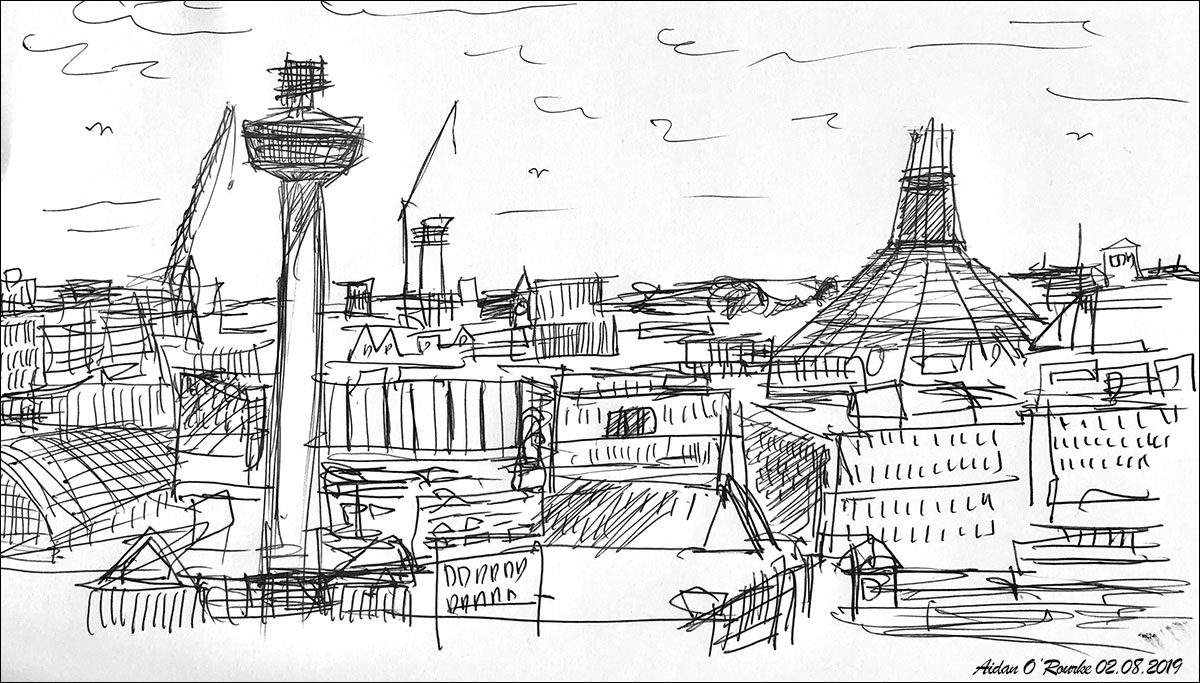 Cityscape of Liverpool, drawn in around five minutes from my photograph taken from the top of the Liver Building 22.06.2019. I was surprised and happy to receive lots of positive feedback on Facebook.