This is a review of “My Guide to Manchester”, the complete guide to the city, written by tour guide and author Jonathan Schofield, published in early 2015 by Manchester Books. 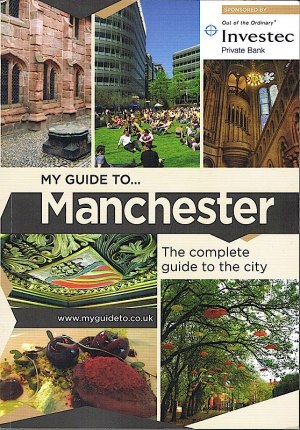 Jonathan Schofield is probably the best known tour guide in Manchester and he has written extensively about the local area and region. I’ve known Jonathan for many years and I’ve contributed photos to some of his previous books.

“My Guide to Manchester” provides a comprehensive view of the city in 2015. It has 22 sections including an introduction to the politics and economics of the city and region, and the new opportunities that will be provided by The Greater Manchester Combined Authority, which will come into force in 2017.

The book will be of interest to visitors and to people who live here. Every major tourist attraction in the city centre is described. There are several interesting city walks, plus features on nightlife, where to eat and places to go.

The 242 pages are packed with over three hundred contemporary and archive photographs, paintings, drawings, maps and diagrams.

My favourite is the bird’s eye drawing of Manchester from 1889 and the cityscape photo showing Manchester Cathedral. I also like the set of drawings by Neil Dimelow which give a 360 degree panoramic view of the city. From cover to cover, the design and layout of the book are excellent

Some of the famous people connected with the city are listed, including Anthony Burgess, Emmeline Pankhurst, Anthony Wilson, Morrissey and Professor Brian Cox. Also featured are Richard Lees and Howard Bernstein, the two men from Manchester town hall who in recent years have profoundly influenced the development of the city. There’s an overview the architectural styles in Manchester, and a very useful index – not all books of this type provide one.

I was invited to the book launch at Manchester Cathedral on Monday 16th of February. I saw many influential people there and met a few of them as well. I asked Jonathan what’s special about this book

Jonathan Schofield
I think what’s special about this guide book is that it’s all mine. This time I can have complete editorial control, recommend that to the publisher, put the stuff in I want, take some of the stuff out I didn’t want to put in last time. And I think also I’m more mature so actually I’ve left room now for three or four other guidebooks.

What I always wanted was a compromise between a practical guide and a souvenir, so I hit two markets. And this one I’m trying to make sure… there’s two or three pictures, sometimes three pictures nearly on every page, and colourful and bright, and vivid and all that, and then also loads of content. And it seems to be working because Waterstones and W H Smiths and Blackwells the rest are selling huge amounts of it, so I’m very very pleased.

So to sum up, “My Guide to Manchester” by Jonathan Schofield is a compact guidebook that provides a wealth of information, small enough to carry on a trip. It’s packed full of interesting useful historic but also up-to-date information on Manchester. It’s written in Jonathan Schofield’s chatty and anecdotal style. It’s as if he’s talking directly to you on one of his guided tours. It’s published by Manchester Books, a new and enterprising publishing house based in Manchester, and it’s priced at £9.99, great value when you consider the depth of information and the very high quality of the presentation.

For more information, visit www.mcrbooks.co.uk or just go into any of the major bookshops in Manchester and you’ll find it.