If you’re visiting a city and want to get the inside story on its history and attractions, who should you go to? A tour guide of course.

I know Liverpool well but I’m always interested in finding out more. That’s the reason why I went on a tour of The Albert Dock and the Three Graces. I wasn’t disappointed. I discovered many new facts.

For instance, I didn’t know that the Albert Dock is the largest complex of Grade 1 listed buildings in the UK, that it was a state-of-the-art building when first built in 1846. I knew already from a tour with historian Quentin Hughes that it was nearly demolished. That was in the 1970s when the Albert Dock was in a derelict state, the basins were silted up and the entire district was closed off. The proposal was to demolish the buildings, fill in the docks and replace them with a car park. Thankfully the Albert Dock was restored and is now Liverpool’s top tourist attraction. It is a unique place – inside the solid brick warehouses house restaurants, apartments, shops, the Tate Liverpool, the Beatles Experience and the Liverpool Maritime Museum, incorporating the Museum of Slavery. The Albert Dock is a must-see for all visitors to Liverpool and a regular haunt for those of us who live in or not far from the city.

There are many reminders of its past – the Dock Traffic Office with its Roman style portico – actually the pillars are hollow and made of cast iron. It was used as a studio for Granada Television. Round the corner there’s a curious ‘helter-skelter’ chute on the exterior of the building. I’d never even noticed it before. It was used to carry ice cubes from the upper floors to a cart where they would be transported to the homes of Liverpool’s wealthy families. The Pump House – now a restaurant – contained the hydraulic pumps used to open and close the lock gates. The Piermaster’s House has been furnished in the style of World War II, when Liverpool was a major target for bombing. You can imagine the Piermaster and his family listening to the wireless and then hearing the air raid siren echoing over the docks.

A few minutes walk away and we come to the three magnificent buildings which are the most famous symbol of Liverpool, often referred to as the ‘Three Graces’. They were built on the site of St George’s Dock. Around the turn of the 20th century it was filled in and two streets were extended across it – Brunswick Street and Water Street. dividing it into three rectangles. On each of these three sites, three buildings appeared: The Port of Liverpool building, the Liver Building and the Cunard Building, completed in 1907, 1911 and 1916, respectively.

The Port of Liverpool Building was designed by Sir Arnold Thornley and F.B. Hobbs and is magnificent inside and out. It was the headquarters of the Mersey Docks and Harbour Board until 1994. Today the building is used by private companies. I was surprised to discover it is only Grade II* listed. It has many superb architectural features. The dome is similar to St Paul’s Cathedral and Belfast City Hall. Many people are not aware that it’s possible to go inside the lobby and admire the magnificent view up towards the inside of the dome. It is a building with ‘wow’ factor. The exterior made of Portland Stone.

It’s important to note that up until the 1960s the exteriors of all three buildings were blackened by air pollution. I will never forget visiting Liverpool in the late 1960s just after they were cleaned. The Port of Liverpool Building seemed to me like a gigantic wedding cake made of pure white icing sugar. Today, in bright, clear sunlight, the exterior for me has a ‘singing ringing’ effect. There are many parallels between architecture and music, but that’s another story!

Next door to it is the Cunard Building, which is also Grade II* Listed. This was once the terminal for wealthy passengers boarding transatlantic liners. They would complete their paperwork in the grand hall and make their way to the front lobby to await embarkation. Our tour guide painted a vivid picture of the hall, with its elegant interior and perhaps a string quartet playing tasteful music. Today that area is the British Music Experience, a permanent exhibition dedicated to the history of popular British Music. It’s not possible to go to the upper floors of the Cunard Building. This is a working office building, and surely one of the best addresses in Liverpool. The building was designed by William Edward Willink and Philip Coldwell Thicknesse, and was inspired by the Farnese Place in Rome. It was the headquarters of the Cunard Line until the late 1960s. Since 2015 it is owned by Liverpool City Council. The office of the Mayor of Liverpool Joe Anderson, is in the Cunard Building. One interesting fact: It is slightly wider at the rear and so has the shape of an uneven rectangle. Like the Port of Liverpool building it is faced in Portland Stone.

The Liver Building is the most famous building in Liverpool. It is made of granite and so the exterior colour is rather dull. But due to its unique design and the two clock towers at either end, topped with the world famous Liver birds, it has become a powerful symbol of Liverpool. Local people are very proud of the building, which can be seen from many vantage points in the city and across the Mersey. It is a building of superlatives. It was Europe’s first skyscraper. It was the tallest building in Europe from 1911 to 1932. The clock faces are bigger than those on the Elizabeth Tower of the Houses of Parliament – more commonly known as Big Ben. The Liver Building is inspired by architecture of the USA, reflecting Liverpool’s rich transatlantic connections. It was designed by Walter Aubrey Thomas and is rightly Grade I listed. Two mythical Liver Birds at the top of the building soon became the symbol of Liverpool. They were designed by the German woodcarver Carl Bernard Bartels.

Originally from Stuttgart Carl Bernard Bartels settled in England and became a naturalised British citizen. He won the commission to design the mythical birds which were completed in 1911. Despite having British citizenship he was interned on the Isle of Man during the First World War and was deported in 1918, leaving his wife behind. He returned and spent the rest of his life in the UK.

The interior of Liverpool’s most famous building may surprise many visitors. Unlike the other two buildings, the Liver building has an interior space. After renovations, the lobby is contemporary in style, with some original features visible, including a plaque dedicated to Carl Bernard Bartels. Looking up through the glass roof of the lobby into the inside space, you will see that the interior walls have been covered with a modern style glass cladding. It’s invisible from the outside of course, but in my opinion, it spoils the character of the building. In my opinion the building should at some time in the future be restored to its original state.

And after we emerged from the side entrance of the Liver building, our tour came to an end. Our Blue Badge guide Tony Boner really entertained and informed us with his deep local knowledge and Liverpudlian sense of humour.

My advice to anyone, anywhere: Even if you’re a local, book a guided tour with a knowledgeable guide. You’ll learn many new things!

The Liver Building, the Cunard Building and the Port of Liverpool Building reflected in the Albert Dock (Image turned upside down and flipped horizontally) 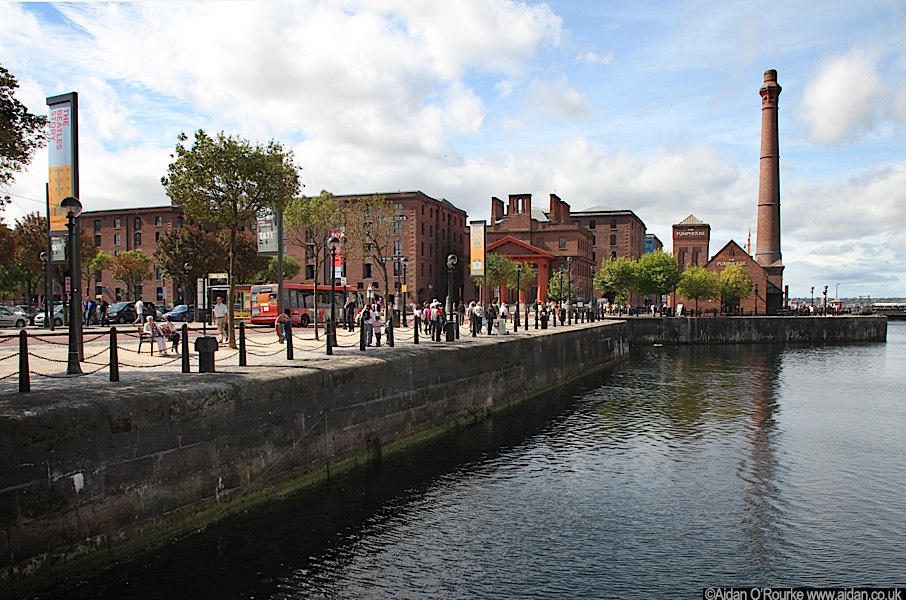 Albert Dock Liverpool, looking across Canning Dock towards the Dock Traffic Office and the Pump House

Panorama of the Albert Dock with the Liver Building, Cunard Building and Port of Liverpool building on the far left.

View along the Albert Dock towards the Three Graces. The new building constructed on Mann juts in on the right, obscuring the view of the Port of Liverpool Building 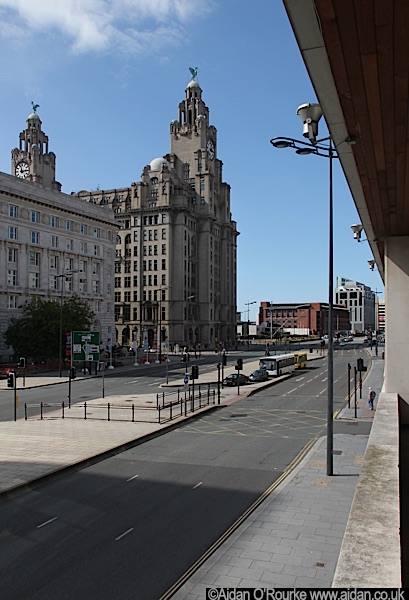 Cunard and Liver Buildings seen across The Strand

View of the Port of Liverpool building from Canning St next to the Anglican Cathedral. On the right is the Queensway Tunnel ventilation building

The Pier Head, Port of Liverpool Building and tourist signs

The Liver Building and Liver Bird 2002 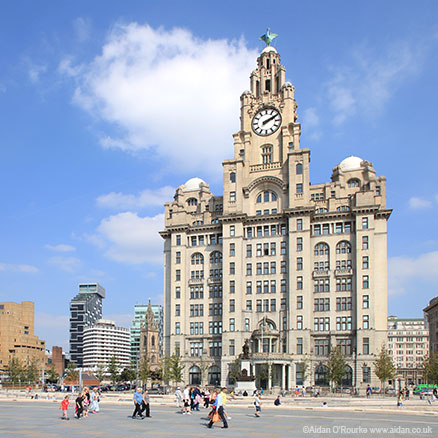 The Liver Building in sunshine