On a walk by the Mersey on 28 Dec I unexpectedly got two very interesting twilight views down the river, with the lights of the M60 out of focus in the distance. Earlier I took a photos series of the sun setting over Wythenshawe. The trees of the Mersey Valley visible in the lower part of the picture. The sun is setting behind one of the blocks of flats. A mobile phone mast is silhouetted on the right.

There are opportunities for amazing images all around us. You really don’t need to go to a distant location to capture striking images. I love the atmosphere as twilight fades into darkness.

When I posted this image on Facebook, I joked: ‘This image is taken from 100 views of the Meru Sai river by the celebrated Japanese printmaker Eidan Oroku.’ I love Japanese woodblock prints, especially Hokusai and I think this image has the quality of one of his prints – the pink coloured sky, the view through the plants and the river which could perhaps be the Sumida river in Tokyo in the 1860s. The lights are on the M60 motorway. In the middle is the weir near Vale Road, Heaton Mersey. I love the out of focus street lights effect, and this is used on the film Lost in Translation set in Tokyo.

On my dusk walk by the River Mersey, I was struck by the ‘Chinese’ quality of what I saw in front of me. The branches form the shape of a diamond with a view through them into the distance. I moved back and zoomed in a bit, throwing the street lamps a little more out of focus – I love that effect. Below the river Mersey flows towards the west. This image has shades of traditional Chinese art, although there are no birds sitting on the branches! I am often inspired by art of all kinds. It’s essential for photographers to develop an artistic visual awareness. The best way to do that is to study art.

Heaton Mersey is in Stockport Metropolitan Borough about 6 miles south of Manchester city centre. There are great footpaths along the river and along the disused London Midland railway viaduct.

Here’s my feature on forgotten bridges which have been uncovered and restored or will soon be. I’ve always been fascinated by bridges. They have an aesthetic quality, they’re also historic and tell us so much about geography. Many bridges are buried under layers of development. A few have been uncovered and will see the light of day again.
We take old bridges for granted. Often we don’t even notice we are crossing them. Many lie buried and forgotten, but a few are being rediscovered. In Stockport, the 19th century Lancashire Bridge reappeared after many years. A section of the covering was cut away to reveal the bridge and river below. A similar project is in progress in Rochdale. The bridge remained out of sight from 1824 until last year. As part of the ‘Revealing the Roch’ project, the surface layer has been removed to reveal the river Roch and bridge underneath. I find it fascinating as it transforms the town by going back in time. In Manchester city centre, part of the medieval Hanging Bridge was revealed in the late 90s. It’s part of the Cathedral visitors centre. And down on the Irwell, one of Manchester’s oldest and most significant bridges has been partially hidden for over a century. It’s the Stephenson Bridge built in 1830 for the Manchester to Liverpool railway. The Ordsall Chord will have an impact on the Grade 1 listed bridge on the Manchester side but the works will also cause part of it to be exposed, a ‘consolation prize’ or ‘extra benefit’ depending on your viewpoint. Discover Manchester city centre on one of my photographic walking tours, £25 for MEN readers. More info on www.aidan.co.uk

Princes Bridge (left) and hidden in shadow, the 1830 Stephenson Bridge.

Here’s my article and photos published in the Manchester Evening News on Thursday 10 December, 2015. During the previous days, record amounts of rain fell on the UK and Ireland, causing major flooding. Thankfully, Manchester was spared the worst. I decided to produce a photo-feature and editorial piece on the subject of local rivers. As ever I had to cram what I wanted to say into 200 words. Below are photos of rivers, including a couple of unpublished ones. Usually there is space for only four or five photos in the piece. The title and introduction were written by staff at the MEN.

TAKE A DIP IN HISTORY OF OUR RIVERS
Manchester’s waterways have played a big part in the way the city has developed – from ancient times and the industrial rvolution right up to the present day, when the flow of nature is still a powerful force.

Manchester is defined by its rivers. The three stripes on the City of Manchester coat of arms symbolise the the Medlock, the Irk and the Irwell, which forms the boundary between Manchester and Salford. In the 20th century, Manchester spilled south across the Mersey into Cheshire, reaching as far south as the Bollin. Around Greater Manchester we have the Douglas, the Tame, the Roch, the Etherow, the Goyt and many smaller streams such as Bradshaw Brook in Bolton and the Lady Brook in Stockport. Rivers are put under pressure when heavy rain falls, as we’ve seen in recent days. Not many remember the floods along the Irwell in Salford in the 40s and 50s. The Anaconda Cut, completed in the 70s, straightened out an elbow of the Irwell, allowing more water to flow. Levees were added to the Mersey as a protective measure, but there is still occasional flooding along Ford Lane. Rivers are places of recreation, where you can cycle, jog or do canoeing. I prefer to walk and occasionally stop to take carefully composed photos! I’m now taking bookings for my photo walk in the city centre, Sunday 13 Feb, £25 for MEN readers. www.aidan.co.uk

The start of the river Mersey in Stockport

Source of the river Goyt in the Pennines 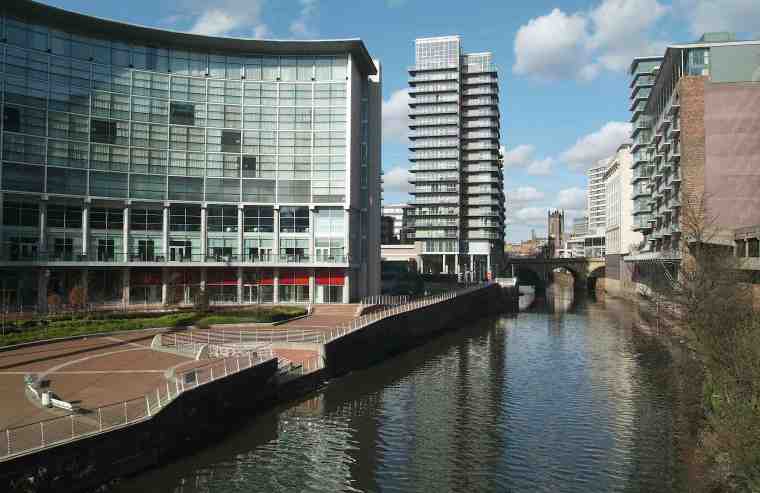 This article, accompanied by photos from my archive, was featured in the Manchester Evening News in late March 2015.

The Rhine, the Rhone, the Danube, the Amazon, the Irwell. It doesn’t sound quite right but today at least the river that flows through “regional centre”, as it’s officially called, is cleaner and more attractive than it has ever been over the past couple of centuries.

The Irwell rises to the north east of Bacup in Lancashire, and meanders south through Bury turning west, then east and on to the city centre where it forms the boundary between the City of Manchester and the City of Salford. Just half a mile further on, the River Irwell becomes the Manchester Ship Canal. The Mersey flows into the canal near Irlam to the west of Manchester.

River Irwell and Blackfriars Bridge in the city centre

Like many rivers, the origin of the name is not certain, but I’ve read that the name Irwell has Germanic roots – ‘irre’ meaning crazy or meandering and ‘welle’ wave or stream. Some learners of English have a problem pronouncing it, making the first syllable rhyme with ‘ear’. But it should be ‘er’, as in dirty, a good word to describe how the Irwell used to be.

During the Industrial Revolution, the Irwell became murky, badly polluted and lifeless due to the poisons and waste that were emptied into the river. In the centre of the town the squalid buildings and factories faced away from the river. In the 19th century, a local resident saved over 50 people from drowning. He is commemorated in the name of a city centre pub on the Salford of the Irwell – the Mark Addy.

Black and white image of Quay Street Bridge, River Irwell with reflections in the water.

It’s important to note that sailing ships used the River Irwell long before the opening of the Manchester Ship Canal in 1894. That’s why there’s a sailing ship in the City of Manchester’a coat of arms. The three stripes represent the three rivers that help to define the shape of the city – the Medlock, the Irk and the Irwell.

In the late 19th century the Manchester Ship Canal transformed the Irwell and the Mersey into a deep channel, allowing ocean-going ships to make their way from the mouth of the Mersey near Liverpool to the Manchester Docks around 35 miles inland. The Docks – actually located in Salford – were once one of the busiest ports in the UK.

The River Irwell with footbridge, Kersal

Upstream, flooding used to be a problem but in the post war years, the situation improved thanks to the construction of flood defences including raised banks. Near Strangeways, close to the city centre, a sharp elbow in the river was straightened out. The project was called the Anaconda Cut. It’s one of the most remarkable but least known engineering achievements in northern England.

Now we can take visitors to the Irwell rather than keeping them away from it. The river is now photogenic in a way it never used to be. There are interesting views up the river towards the Cathedral or down towards the the Ship Canal. A tour boat has operated in the summer months between the city centre and Salford Quays but unfortunately few boats use the river, unlike the Thames in London.

View of the Ship Canal and Manchester city centre. The former Pomona Docks are on the right.

At least there are plenty of fish, geese and other wildlife on the Irwell and they can be seen right in the heart of the city.

We may never be able to use the adjectives ‘magnificent’, ‘spellbinding’ or ‘romantic’ about the River Irwell, but at least we can say that it’s ‘presentable’!

View along the River Irwell Manchester city centre. The Calatrava bridge crosses in the foreground. Next to the Cathedral is the modernist style New Century Hall.